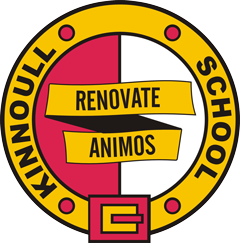 We have 3 houses at Kinnoull
Each pupil belongs to one of these houses.The houses are called Tummel, Isla and Garry.
Where do the names come from?
Garry, Tummel and Isla are the names of 3 Perthshire rivers which all run into the River Tay.They run through some beautiful countryside.
The River Garry flows out of Loch Garry. It used to be a much bigger river, but a lot of the water is held back by dams which are used to make electricity. When the dams get too full, they let  some of the water out. People enjoy white-water rafting  when this happens.

The River Tummel starts up on Rannoch Moor. It flows through several lochs, including Loch Rannoch and Loch Tummel. It flows through Pitlochry, where there is a dam across the river. There is a special kind of ladder so that the salmon who need to swim up the river to lay their eggs,can still manage to do so.

We can all be proud of the beautiful rivers our houses are named after. We are lucky to live in such a lovely part of Scotland.